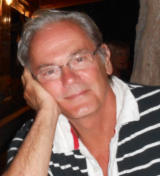 Claude Frasson is Honorary Professor and Associate Professor in Computer Science at University of Montreal. Director of the HERON laboratory, his research interests are at the convergence of Artificial Intelligence, Education, and Human Computer Interaction.

He holds a PhD and a Doctorat d’état in Computer Science from the University of Nice, France (1981) and produced about 340 refereed publications including 5 books.

He founded, in 1988, the ITS International Conference in Intelligent Tutoring Systems and is the chair of its Steering Committee. He coordinated the SAFARI project, a multidisciplinary research effort involving an industrial approach for building, distributing and controlling intelligent courses on the Web and is at the origin of a patent on a distance learning architecture based on networked cognitive agents. He received an ACM award for excellence as the organization chair of 2001 Autonomous Agent Conference. Since 2004, he aims to understand, using EEG systems, how the human brain functions with emotions, considering that they play an important role in knowledge acquisition and subconscious learning.

He chaired about 14 international conferences and was a Keynote Speaker in 12 renowned Conferences. He is a co-editor of the Encyclopedia of the Science of Learning (Springer, 2012). His recent research concerns the development of intelligent cognitive control systems based on emotions assessment and immersive environments.