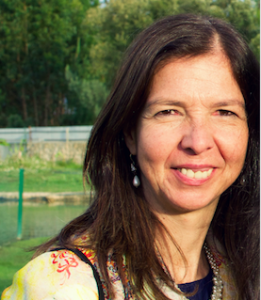 Ana Paiva is a Full Professor in the Department of Computer Engineering, IST (“Instituto Superior Técnico”) from the University of Lisbon and is also the Coordinator of GAIPS – “Intelligent Agents and Synthetic Characters Group” at INESC-ID.

Her main research interests are in the fields of Autonomous Agents and Multi-Agent Systems, Affective Computing and Human-Robot Interaction. She has founded and led the GAIPS research group at INESC-ID for fifteen years (see http://gaips.inesc-id.pt/gaips/). The group investigates the creation of complex systems using an agent-based approach, with a special focus on social agents. Prof. Ana Paiva is recognized worldwide for her contributions in the areas of virtual agents, multiagent systems and affective computing. In 2010 she was elected to be part of the IFAAMAS Board of Directors. For the past twenty years she has been involved in the organisation of twenty international events, including the 2nd International Conference on Affective Computing and Intelligent Interaction in 2007, the AAMAS (the International Conference on Autonomous Agents and Multiagent Systems) in 2008 and the Human Robot Interaction (HRI’16) conference in 2016. She has promoted several national and international projects in the fields of intelligent autonomous agents, having coordinated the participation of INESC-ID and IST (Instituto Superior Técnico) in the scope of 18 European Research Projects.

She has edited six books and published more than two hundred papers in scientific journals, conferences and books. Prof. Ana Paiva’s main research focuses on the problems and techniques for creating agent-based systems (be them virtual or robotic) that can simulate human behaviour or establish natural interactions with humans.