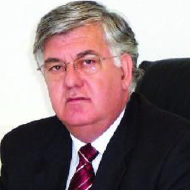 Professor Peter P. Groumpos is a full Professor at the Department of Electrical and Computer Engineering since 1989. He is also the Director of the Laboratory for Automation and Robotics, which he created and developed since 1992. He served Xilokastro, Korinthias Greece, where he stayed till the end of his High School years and then he went to USA for his undergraduate and graduate studies. He received his PhD in 1978, from the state university of N.Y. at Buffalo (SUNYAB) in 1978. He joined Cleveland State University in 1979 and stayed till 1989 on it, till be returned permanently to his homeland in 1990. He joined, as a full Professor, the Department of Electrical Engineering and Computer Science, of the University of Patras. While in Cleveland State University he created and directed a new Energy Research Centre and a Communications Research Laboratory at Cleveland State University. While in CSU, he was awarded a 1-year Fulbright scholarship and visited the University of Patras in which he taught and perform research in the area of Systems and Control. He has taught for more than 40 years (14 years in USA and 28 in Greece). He has teaching experience in broad scientific areas such as: Signals and Systems, Automatic Control, Intelligent Systems, Fuzzy Cognitive Maps (FCM), Information Technologies, Fuzzy Logic, Photovoltaic Systems and Software Computing.

Prof. Peter P. Groumpos has a vast experience as a Principal investigator in a number of EU and Greek PRD projects. His main research interests (among others) are: Modelling and Controlling Complex Systems, Intelligent Control, Soft-computing techniques for Complex Systems, Hybrid Energy Systems, Robotics, Fuzzy Cognitive Maps (FCM), Simulation and Application of Informatics in the areas: Energy and Environment, Health, Agriculture, Industr, Smart Grids, Business, Economics and Social Systems. He has participated in more than 75 educational and PRD project funded by public as well as private funds. He has over 300 publications (books, invited chapters and papers in journals and International conferences and Workshops) and he has more than 4000 citations. From 2004 till 2010 he served as President and CEO of the Patras Science Park (PSP) which is a government owned public organization.

Prof. Groumpos has also served and/or still serving on a number of distinguished positions. He has been the Greek representative to the EC committees ESPRIT 1990-94 IMS 1991-94, ICT 2004-9 and to EUREKA Program, the High Level Group 1990-94 and 2004-10. He was one of the founders of the Mediterranean Control Association (MCA) 25 years ago and he is serving on it as a Vice-President till today.