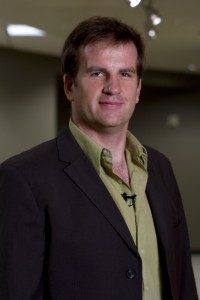 Winslow Burleson is an Associate Professor at NYU’s College of Nursing with an affiliate appointment in NYU’s Steinhardt School of Culture, Education and Human Development. From 2006-2014 he served as an Assistant Professor of Human Computer Interaction in the School of Computing, Informatics and Decision Systems Engineering at Arizona State University and in 2011 as a visiting Honors Faculty Fellon in ASU’s Barrett Honors College. He is the Founding Director of the Motivational Environments research group and author of over 100 scientific publication (including the “best paper” at AI in Ed 2009 and the 2011 UMUAI James Chen Award) and has been awarded 10 patents. In 2013, he was honored with a Google Faculty Research Award and in 2009 the National Academy of Engineering recognized him as, “One of the nation’s brightest young engineering researchers and educators.” He received his PhD from the MIT Media Lab, has been honored as a Kavli Fellow and served on National Academy of Engineering, National Academies of Sciences and National Science Foundation Committees.